Michael and I both enjoy running for races that have special meaning so when we heard about the Bataan Death March in New Mexico- http://www.bataanmarch.com - we knew that this was a race we would love to run.  The story goes that back in WWII when thousands of both American soldiers and Filipino soldiers surrendered to the Japanese.  They were forced to march though the hot jungles in the Philippines for several days with almost no food or water.  Many died or were killed along the way.
The young men who survived this ordeal have now aged.  As young men they risked or loss their lives for our country.  By remembering their ordeal it seems to make the survivors feel appreciated.  I do appreciate them and was honored to shake many of their hands and tell them so. 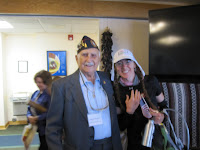 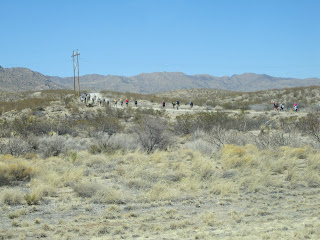 On to the race....Because there was about 6000 participants this year we needed to get through security at the base entrance and park about 2 hours prior to the start of the race.  It was cold and windy and masses of people gathered near the Frontier Club building in an attempt to block the wind and retain some heat.  We were able to meet up with several fellow Marathon Maniacs for some group pictures pre race.  The opening ceremony was touching and as all racers headed to the start line they passed several survivors sitting along the way.  After shaking a few hands I was off.  Miles 1-8 seemed quite pleasant.  The wind died down a bit and the course was remarkably easy.  Mile 8-10 started the battle with the wind and incline and by mile 10 the winds were so bad that every time I lifted my left foot to run it would blow against my right ankle.  I got to a point were I really felt like quitting.  About that time a young runner, Jerry, was next to me asking me a question about my Moben arm sleeves.  We started chatting and decided to walk a bit together.  I learned about a recent 100 miler he had done and shared some of my run stories with him as well.  It was still miserable but it is true that misery does love company, lol.  At about mile 14 the course curved and we found ourselves with the wind at our back AND heading down hill!  We were able to start running again and spent the majority of the next 12 miles running.  I made it in under 6 hours (5:43) which was my original goal for this difficult course.

At the finish line there were more survivor hands to shake.  One of the gentleman kissed my hand as I thanked him for his service-that was so incredibly sweet.  I met up with Michael who rocked the race and had been waiting for me at the finish as I came in.  We were treated to a nice lunch on base before heading home.

I would recommend this race.  Besides the huge line at packet pick up everything was well ran and the support both on and off the course was amazing!
Posted by Kimberly at 5:44 PM 3 comments:

Kimberly
I am a 4 time cancer survivor who wants to stay healthy and fit. I strive to not let any situation define me but to let all situations mold me into a better person.